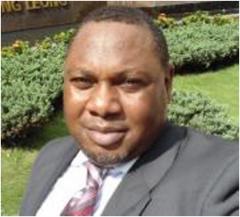 Julius O. Ola-Peters earned his BSc and MSc Economics from Ahmadu Bello Univeristy Zaria in 1988 and Jan 1992 respectively. He joined NISER/PAD in 1992 under the UNIDO Industrial Technical Assistance Programme and support macroeconomic modeling, industrial policy analysis and wider training in the nine industrial sub sectors. Julius moved over to the National Centre for Economic Management and Administration (NCEMA) in 1993; rising from Fellow II to a senior research Fellow (NCEMA) by 1998. He was a key staff in the delivery of the Centre’s mandate in building critical mass of senior officers in economic planning and management at the federal, state, and local government levels. He also engaged in in-depth policy research and consultancy services with a view to enhance the quality of Centre’s training programs and providing input into public policy formulation and implementation. He served the Nigerian Economic Society (NES) as the Business Manager from 1996-2000.